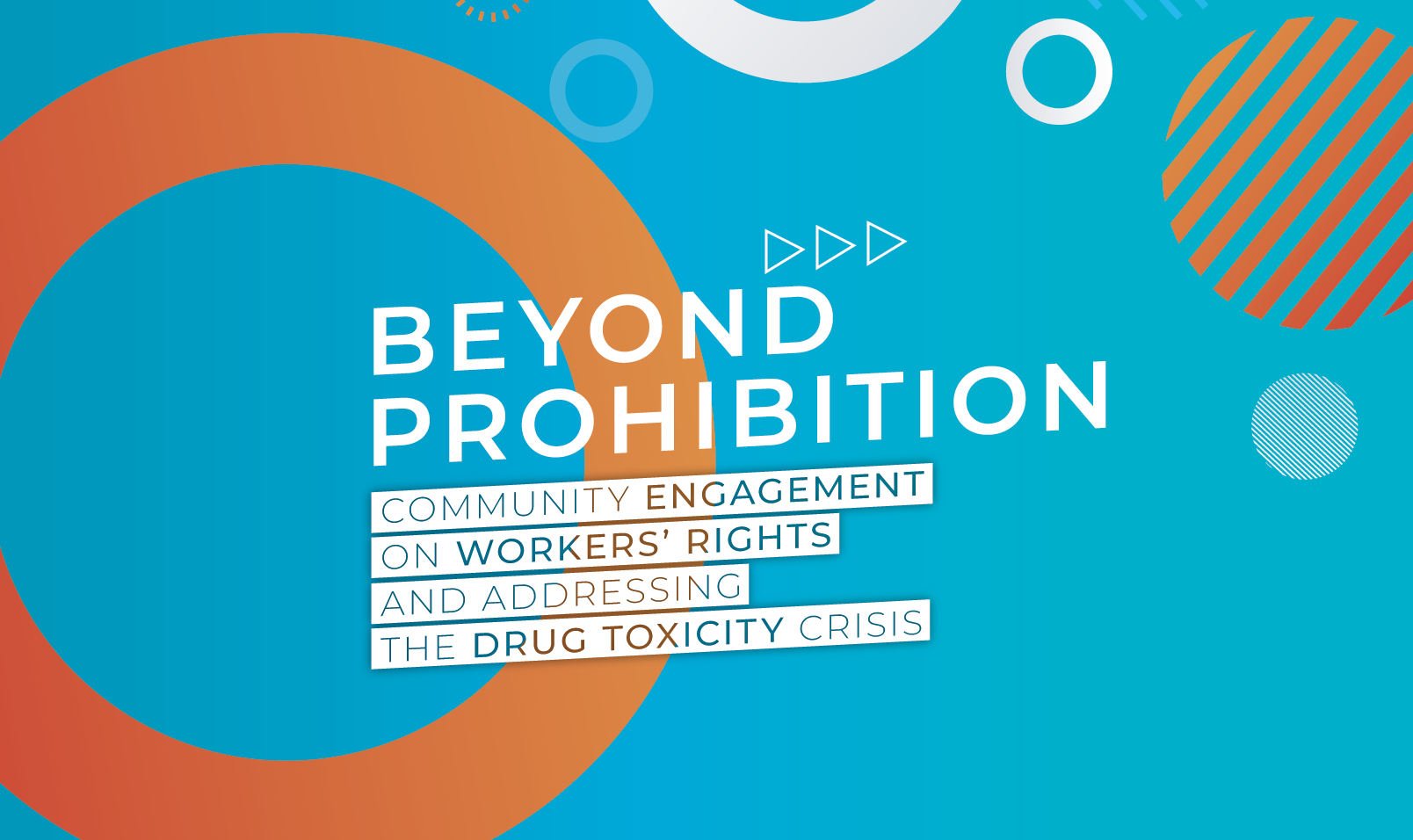 BC is experiencing a public health crisis stemming from an influx in toxic drug supply. The number of overdose deaths has skyrocketed in recent years, as a result of an unregulated drug supply, stigmatization, and criminalization of drug use. On April 14, 2016, the B.C. government declared opioid-related deaths a public health emergency. Since then, decision-makers have failed to adequately address the crisis. Earlier this year, the BC Health Coalition, in collaboration with the Canadian Drug Policy Coalition (CDPC), convened to learn from panelists and gain a deeper understanding of the drug policy landscape in British Columbia. As a result of the dialogue, the BC Health Coalition has published a report presenting a summary and key recommendations. Read the report - Beyond Prohibition.

Although the provincial government is piloting a decriminalization program, People Who Use Drugs (PWUDs) and their advocates point to the myriad ways the program fails to take a holistic approach. They advocate for moving away from coercive abstinence-based treatment models that primarily rely on privately funded and unregulated for-profit treatment centres, as well as employment mandated treatment. Instead, they advocate for a more evidence-based progressive drug policy.

READ THE BEYOND PROHIBITION REPORT

Our journey to building solidarity across labour, non-profits, and PWUDs

From a drug policy perspective, harm reduction is an evidence-based public health approach rooted in social justice and the understanding that PWUDs are human beings who deserve to be treated with safety, compassion, and the utmost dignity and respect. Dominant narratives about drug use have shaped harmful stereotypes that stigmatize drug users. Unregulated for-profit treatment centres were identified as particularly problematic, and it was determined that treatment must be premised on the principles of non-coercion, bodily autonomy, and prior informed consent. Participants expressed that a harm reduction framework is a better alternative to criminalized and medicalized models because it addresses the social determinants of health for PWUDs.

One of the most prominent barriers standing in the way of effectively addressing the toxic drug supply and overdose crises is the stigmatization and criminalization around drug use. Although the province will soon implement a decriminalization pilot program, PWUDs, their allies, and advocates recognize that these measures are quite limited. Instead they call for transformation that addresses the crisis at its root. Some examples discussed by participants included removing law enforcement as gatekeepers to social services as well as redirecting resources from enforcement to invest more resources into mental health and community services. 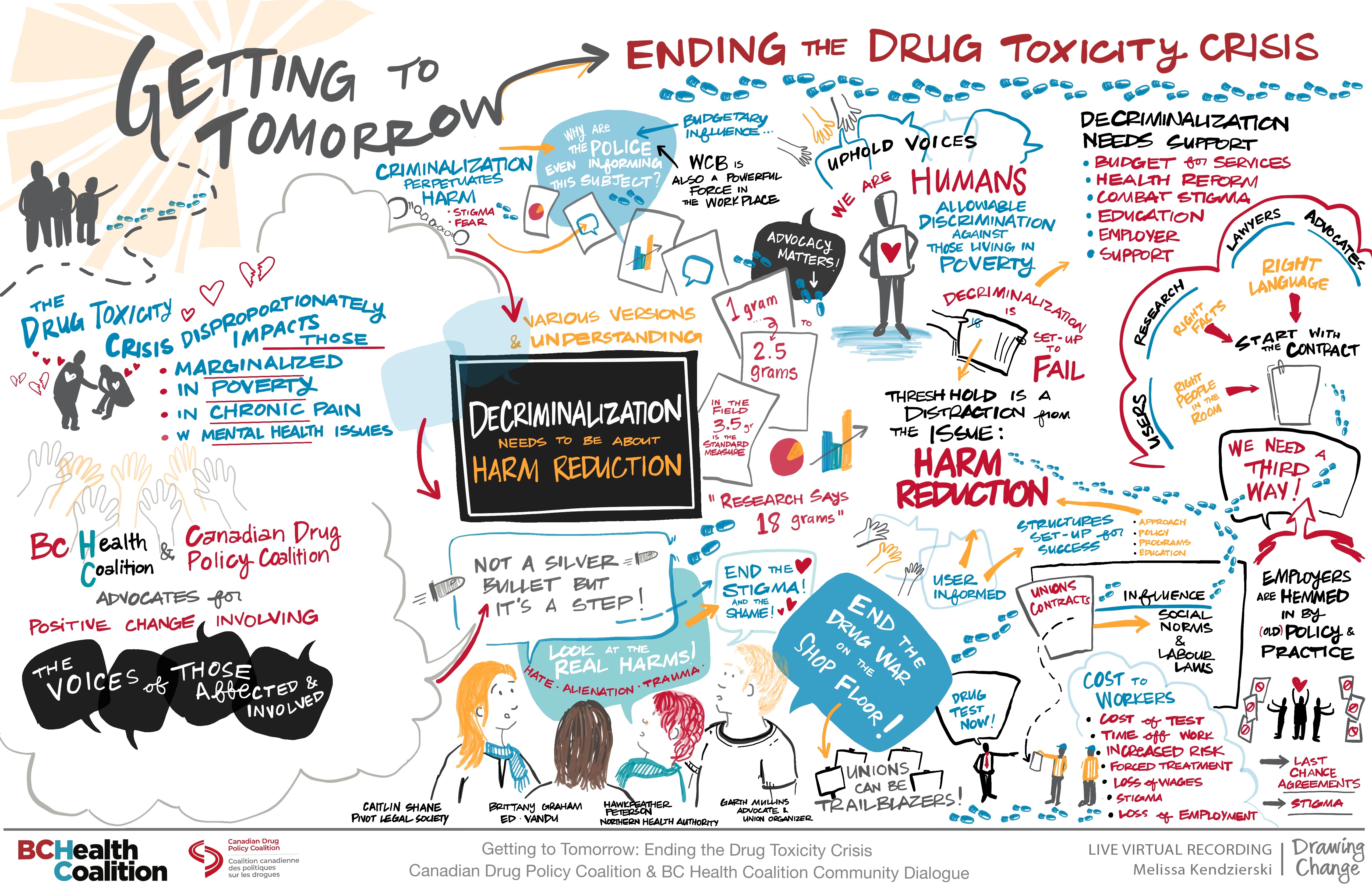 No Drug War on the Shop Floor

Employers have long surveilled employee drug use through drug testing programs and enforcers of coercive employee-mandated treatment regimes. These policies and procedures are based on the assumption that people who use drugs do not have the capacity to work. Instead, advocates opt for the employers to resource employees with harm reduction treatments. Participants discussed how the labour movement can play a key role in advocating for a transformation in employment drug policies. Workers can propose language in job contracts that seek evidence-based alternatives. In addition, unions have the ability to lobby to change labour standards.

Drug prohibitions are not effective in achieving their goal of eradicating drug use because people who use drugs will always exist. Instead, these laws contribute to increased addiction, social exclusion, difficulty acquiring and maintaining formal employment and housing, stigmatization, and an overall destabilization of one’s livelihood. Participants discussed ways in which reconceptualizing legally-regulated access to pharmaceutical-grade drugs as being a public health and social justice issue will significantly reduce the number of deaths by eliminating the need for many PWUDs to rely on an unregulated, unpredictable, and toxic drug supply. Participants also acknowledged that legal regulation of drugs is a broad term that denotes a wide range of potential regulatory models, which should be developed collaboratively with PWUDs through community-driven solutions.

This collaborative process with the Canadian Drug Policy Coalition has allowed for the BCHC and its members to engage deeply and build capacity to support the call for more evidence-based drug policy reform. The conversation and insights generated during these dialogues serve as a pathway to mobilizing and engaging our membership in this public health crisis that sits at the intersection of BCHC’s work fighting for public solutions to improving our health care system. To take a deeper dive into the dialogue, please read our report.