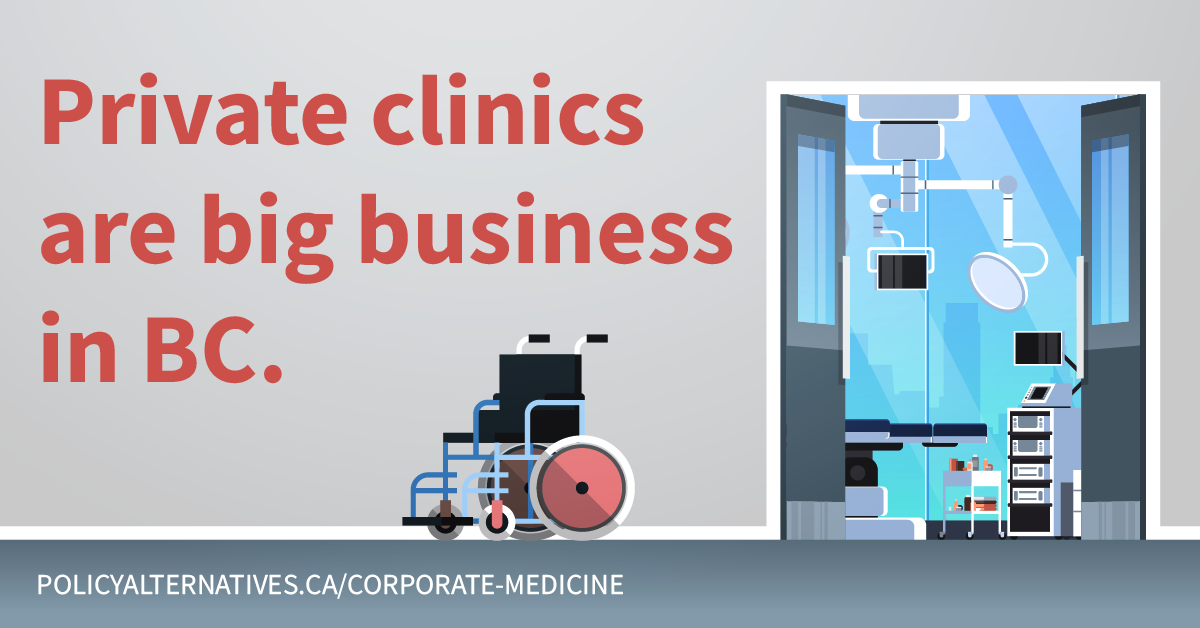 Private surgeries and medical imaging are big business in BC. Over the last two decades, this for-profit sector has benefited from increased outsourcing of publicly funded procedures and unlawful patient extra-billing.

These private businesses are flourishing in part because the BC government has been awarding them millions of dollars in contracts to provide services while not holding them legally accountable for unlawful billing practices that are prohibited under the Canada Health Act and BC Medicare Protection Act.

In a research report published by the Canadian Centre for Policy Alternatives BC Office and the BC Health Coalition, I analyzed public financial documents and materials obtained through Freedom of Information requests in order to take a close look at recent trends. These materials revealed:

Importantly, the BC government has made positive recent moves to enhance access to MRIs and reduce surgical waitlists in public hospitals. But the numbers show a troubling continued reliance on outsourcing to for-profit clinics, especially for surgical procedures.

It is particularly disturbing to see substantial health authority payments going to private clinics known to have engaged in extra-billing. Instead of tackling unlawful extra-billing head on, the province’s strategy has been to increase outsourcing to private surgical clinics but make those contracts subject to compliance with provincial and federal law. In other words, BC is using one form of privatization (outsourcing, or contracting out) as a ‘carrot’ to curb another (two-tier health care where those who can afford it pay privately).

That strategy is reflected in correspondence between the owners of False Creek Surgical Centre and the Deputy Minister of Health, which I obtained through a Freedom of Information Request. In an email exchange following two meetings, the corporate representative expresses his appreciation that the provincial government will provide “long-term, volume guaranteed contracts which will enable us to make an informed decision on the long term sustainability of this business model.”

False Creek Surgical Centre is one of the largest private clinics in BC and has continued to receive public funding despite a recent BC government audit finding the clinic engaged in unlawful extra-billing. And it is also troubling that Interior Health continued to flow public dollars to Kamloops Surgical Centre during and after the period when government auditors uncovered unlawful extra-billing.

The pandemic has put extraordinary pressure on public health care across the country, as surgeries were canceled en masse to free up hospital capacity to deal with patients suffering from severe cases of COVID-19. One of the ways BC tackled the resulting backlog in surgeries was to increase surgical outsourcing to private clinics and increasing public capacity. While this strategy was successful in reducing wait lists in the short term, funneling public dollars to for-profit corporations contributes to workforce shortages in our public hospitals and also comes at a steeper price—a profit margin, capital costs (private-sector capital assets that the public pays for but will never own) and often higher labour costs (to attract staff from the public sector) are always built into the per-unit cost charged to governments by private clinics.

Instead, BC can address wait times more efficiently within the public health care system by further increasing public surgical and diagnostic capacity (the recent acquisition of several private MRI and surgical clinics by the government are positive steps in this direction), scaling up successful strategies like centralized waiting lists and pre-screening by teams of health care professionals and reducing the need for hospital care with more emphasis on primary and community-based care (especially for seniors).

The provincial government has made some important progress in these areas, but it needs to put a stop to unlawful extra-billing and ramp down its reliance on for-profit clinics over the coming years.

At a press conference on August 24 following the release of the CCPA-BC and BCHC report, Health Minister Adrian Dix characterized the report’s findings as “inaccurate” and suggested that the analysis did not recognize significant recent investments in public health care by the provincial government.

We hope that an explanation of the methods and sources helps clarify concerns. As explained in footnote 10, the author analyzed health authority financial statements between 2015/16 and 2020/21. Each health authority must publicly disclose payments each fiscal year to suppliers valued over $25,000. Financial documents were retrieved from health authority websites, and a dataset of private surgical and imaging clinics was created. The list of private clinics was verified against the list of accredited clinics by the College of Physicians and Surgeons. Another key source is a Health Canada annual report (also cited), which provided information about unlawful extra-billing in BC. This analysis involved the extraction of data from over 40 health authority disclosures.

As well, the report draws on two Freedom of Information (FOI) requests, including private clinic audits conducted by the Medical Services Commission that had not been made available to the public. Together, these public disclosures and documents obtained by FOI revealed that Kamloops Surgical Centre and False Creek Healthcare Centre have received health authority payments, despite audits finding evidence of unlawful extra-billing. This research would not have been possible using only publicly available information. To foster greater transparency, we recommend the proactive disclosure of health authority contracts with private clinics and audits of unlawful extra-billing.

As non-partisan organizations, the CCPA-BC and BC Health Coalition welcome the invitation from government to discuss our research findings.